toyota could use some wings

I am invested in the success of Toyota’s NASCAR race teams.

Well I own a Toyota (a cool and fun Toyota Matrix XR named “Trinity” my homage to the lead female character in “The Matrix” film franchise) and I like the company. So if Toyota isn’t a winner I’m not a winner! Well, sort-of. I don’t take it that seriously but you get my point. 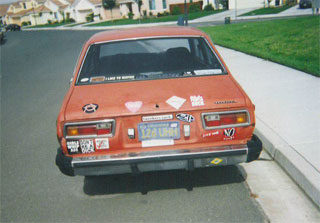 My first car in high school was a 1970-something Toyota Corolla named Betsy (right) that every member of my family drove before it got handed down to me in the late 1990’s. I loved that car, it was old but it lasted for a long time. Toyota knows how to make great cars that last, that are reliable. But now they need to make some race cars that can win, heck, just qualifying would be nice.

While Dave Blaney is currently ranked 3rd (David Reutimann of Michael Waltrip Racing is in 4th) in the points standings for the Busch series — which is really awesome — his teammates at Bill Davis Racing and the other Toyota teams are seriously lagging.

As much as I was annoyed with Brian Vickers for stupidly spinning out Dale Earnhardt Jr. last year (I have a hard time letting things go, can’t ya tell?) at Talladega I’m starting to root for him again. Part of that is because I dig Red Bull (eventhough I’ve never drunk a Red Bull in my life, I appreciate great marketing) and of course Toyota in general.

I feel bad because AJ Allmendinger is completely new to this NASCAR thing and he’s not getting the opportunity to really prove himself, show us all what he can do. Jeremy Mayfield is back but you can hardly tell because he’s only been in 3 races so far this season. I’m looking forward to him racing — competitively — against his ex-Evernham teammates.

Then there’s Michael Waltrip. Only one race under his belt this year and the rest of his race teams are seriously struggling. Dale Jarrett is out of provisionals, so if he doesn’t qualify on time for Richmond he’s not going to be in a Nextel Cup race for the first time after 424 previous starts. Maybe there’s an early retirement ahead for Dale? He’s really good at analyzing the Busch races on ESPN. At least someone at Red Bull Racing is winning… Today they announced that 20-year-old mechanical engineering student Matthew Marchiando from the University of California-Davis won the first-ever Red Bull Velocity Lab internship. He’ll be spending his summer at the Red Bull Racing race shop in Mooresville, N.C. I post this because he’s local to me (Davis, Calif is an hour north of me in the San Francisco Bay Area). Marchiando’s internship application included a plan on how to perfect “how the front splitter limits front-end travel” on the Car of Tomorrow. Good luck Matthew!