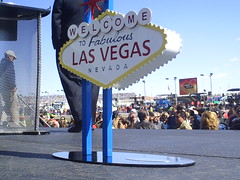 Is everybody done talking about Talladega yet? Let’s move on to talking about more important things like “What will Chandra Johnson be wearing during Champion’s Week?” and “Who will be Chad Knaus’ date?” or “Can I be Ron Malec’s date?” (I’m kidding, okay, sorta, no really I’m kidding, maybe.)

That’s way more fun isn’t it? And speaking of the Championship festivities there are a number of ways for fans to get tickets to attend the 2009 NASCAR Sprint Cup Series Awards Ceremony that is being held for the first time in Las Vegas on December 4, 2009 (my mom’s birthday!).

Here’s a handy-dandy rundown of all of the opportunities: